Looking for a dream in the Spanish el campo

As I have written elsewhere, these old fincas are everywhere, crumbling into their past and waiting an uncertain future. Each tell a story, and most tell a similar one.  How many times have I tramped up and down with an agent and witnessed the same scenario?  The bare tell-tale contents of the places scattered across the simple rooms, as if abandoned in a hurry, no time or need to take the last bits which are worthless after all. Some have packed up their tools and mementos with the promise of valuable city jobs, and others have just drifted away.

For me, the most poignant, was the stone house at the very top of a steep narrow outcrop that promised 360 degree panoramic views. In the photos it looked amazing, inviting a future perfect life. Wearily the agent took me up there, already knowing the outcome. We arrived, past endless tumbling down houses perched off a dirt track, no romance, no privacy – so steep and treacherous that when we arrived and looked over the edge into the industrial landscape way below, it was all I could do not to jump.

The allure of where you do not want to go. Nothing the house could offer could have made up for the trip, and worse, everything the house had to offer only made the trip even more painful. I am sure the hill must have fallen away past the house at some point because it had no land at two of its sides and the walls went straight into a sheer drop of some two hundred meter into the valley below. Or perhaps it had always been like this for here there were no windows.

In front there was also a definite lack of flat land and it made you wonder WHY anyone would build up here unless they were terrified of invasion, robbery and worse. Presumably as well when this place had been built, few of the other places had existed on the way up. It really was very bizarre,

We entered and the thing that struck me most was the calendar on the wall that said “1984”.  In front of it were two small tables, laden with pans and such,  and a chair. A side room sported a still made up single bed, complete with mildew, and upstairs bats nested under the rotten roof timbers. It hit me in the face. This was the “romance” that us foreigners were searching for?

Down the hill we went, agent without a sale, and me wondering about the life I so yearned after. 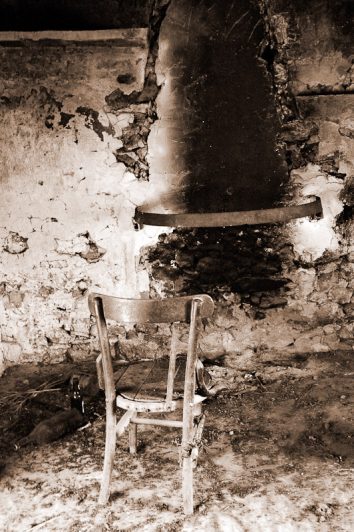